What lies behind the next tree

I live in a little slice of built up urban hell in South Yorkshire. OK maybe I am overstating this a tad, it is not quite a hell as such. It is, as I have described to friends who live in countries with wider open spaces between towns, quite built up none the less. There is not a direction I can drive here where it would not be one village and town blending into the next with barely a few moments of open countryside to admire from the window. And yet, as I drive around I do see countryside none the less. It sits out there between one housing estate after the other and sometimes I have thought to myself how my opening statement here is perhaps a little hyperbolic. Still, knowing that picturesque scenery is just a stones throw away and actually availing myself of it up close are not one and the same thing.

Quite recently my life has become pretty sedentary as I work from home, at my computer all day long, only venturing out for the smallest of personal reasons. Supermarket shopping. Cinema. Out for dinner with family. Need something from the mall. Basically all needs that generate a reason to leave the house through necessity. It has been a long while since I left the house simply to go somewhere for no reason other than to enjoy the place.

Not fifteen minutes drive from where I now sit there is a park with a reservoir and woodland all around it. I have driven past many times, from one chunk of urban landscape to another, but never really walked around the place until the last couple of weeks. Spending so much time at the computer has been doing a number on my eyes lately, something else I should address as my glasses might no longer be suitable. Anyway, to get away from the temptation of the distractions of video games and writing I forced myself to go for a walk around this lake. It was a cool and gusty day and it rained gently most of the time. Either way I came back feeling good for having gone ‘just because’.

I just got back from my second outing there today, and the weather was much nicer for photos. Here’s one! 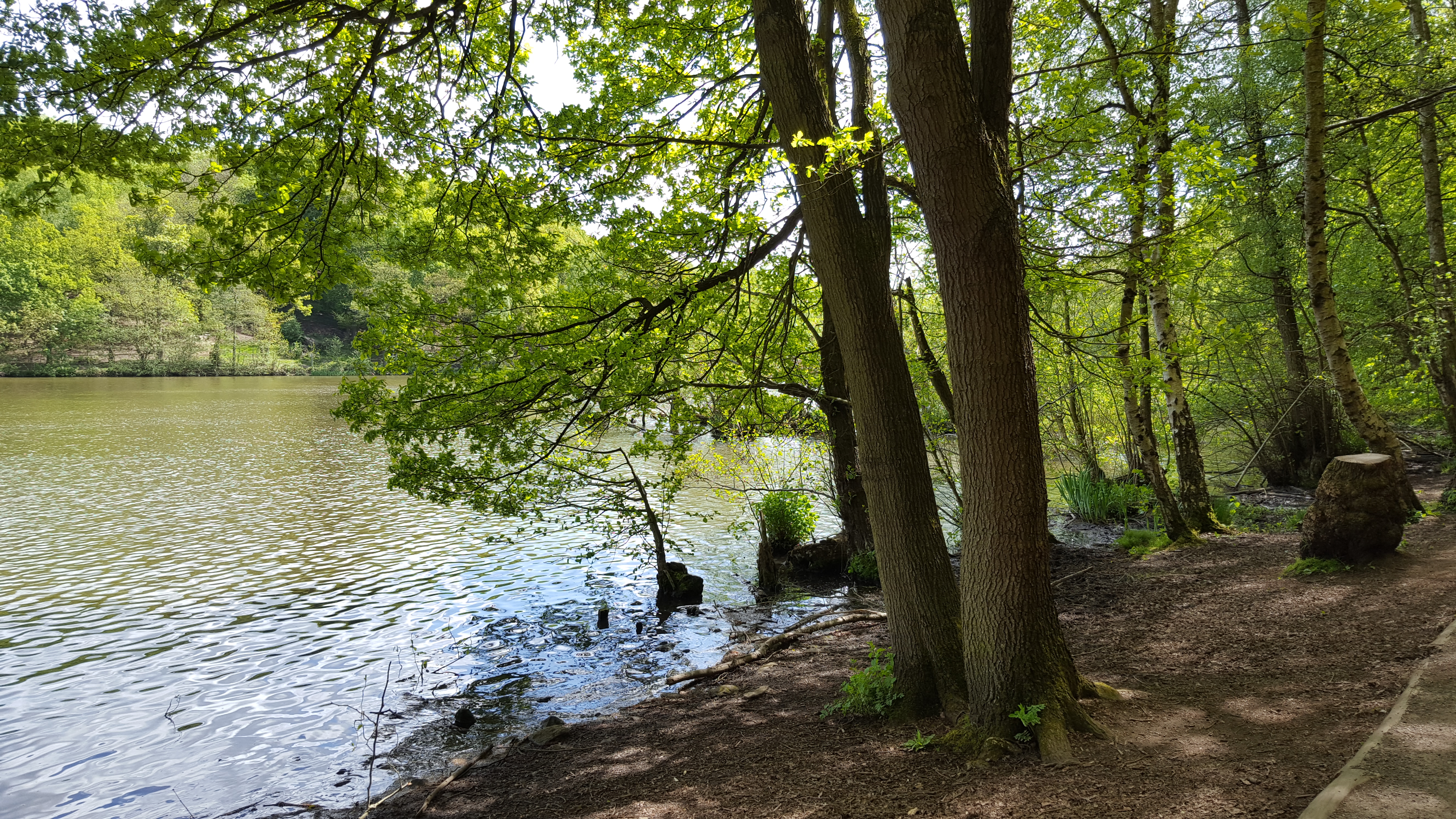 Nice, huh? It was not too hot, and around this part of the path where I began the trees gave me a good deal of shade which also made for some good picture material. Like this! 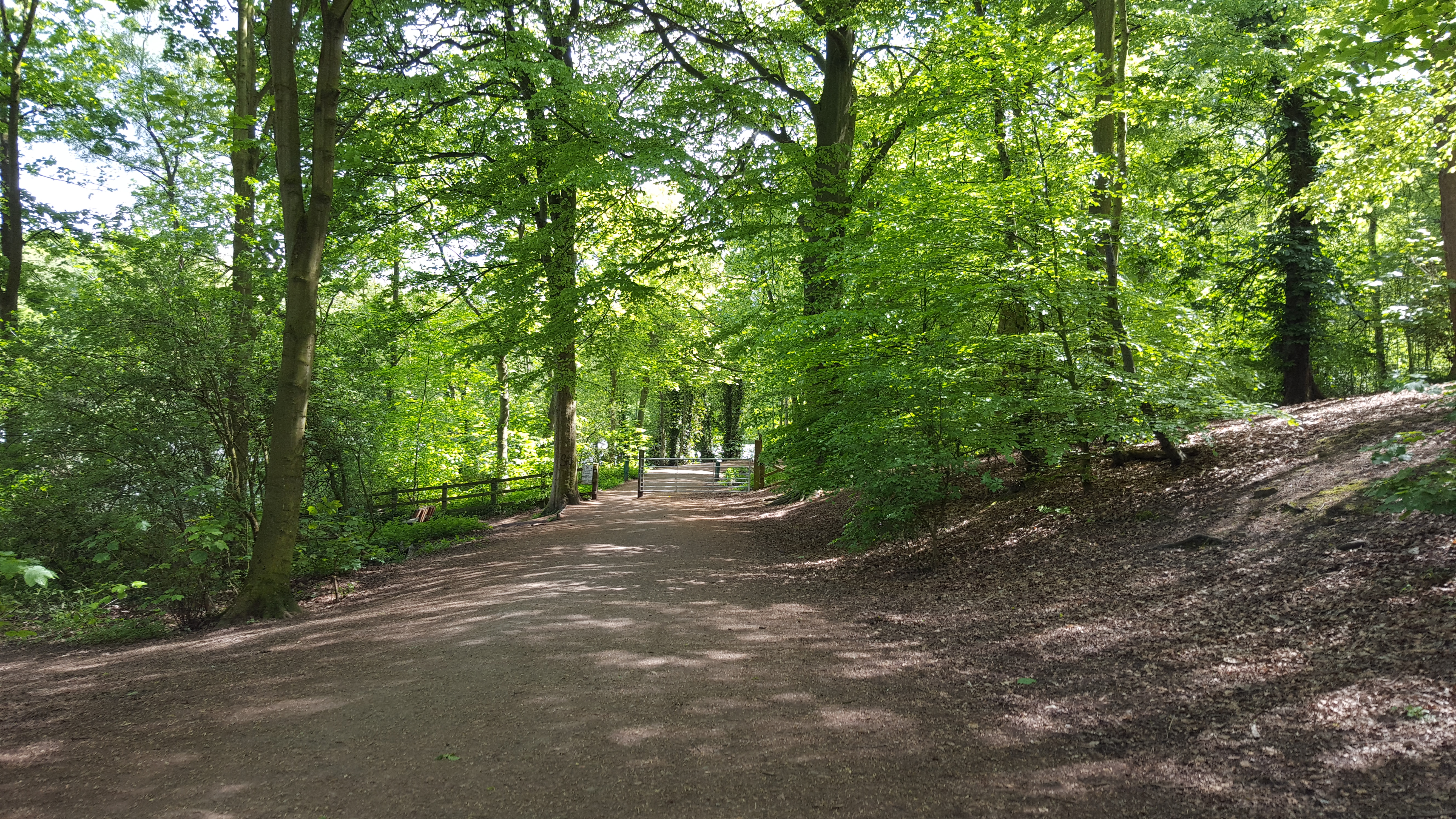 The sky was mostly clear with a few broken cotton bud clouds drifting by and the wind was barely a factor. Well, until I walked around the lake to the other side where it was more exposed to the prevailing direction. Even then it was not unpleasant and the sun was behind me on the return leg of my walk.

Despite my more recent lapse into almost complete hermitage, I do not dislike being outdoors. It is a running joke with those who know me, sure. I encourage it even, hissing dramatically at the sun when stepping outside and muttering to myself about how I am melting. I guess my issue is that I dislike being hot. I do not find this comfortable. I find being cold uncomfortable as well, though I can stand being cold over being hot. I guess we all have out little quirks. Also I will admit to having a genuine fear of wasps and hornets. Bumble bees are… eh, OK I guess. I would rather they keep their distance all the same. So in the summer months I tend to stay inside and away from psychotic stingy insects.

Either way, I do love nature and the outdoors. I always enjoy being in places like this. And not fifteen minutes from where I live, I have somewhere I can go and stretch my legs. And, until now, I have never bothered to go there. This struck home as I headed along the path from the car park and reached the edge of the trees. The smell of pollen and wood, of the recently fallen cherry blossoms and wild flowers, hit my nostrils and I smiled to myself a little. It was quiet, too. No motorboats allowed on the lake and once I was clear of the nearby road, no traffic sounds. Just the rustling of leaves overhead as the gentle breeze wound its way through the trees. Along the route around the lake, other paths branch off up the hill and deeper into the woods. On my next venture out there I may check out some of these other paths.

I am glad I have nudged myself out of the door for once, and felt rewarded for having done so. I think this will become a habit from now on… here’s a few more pictures!