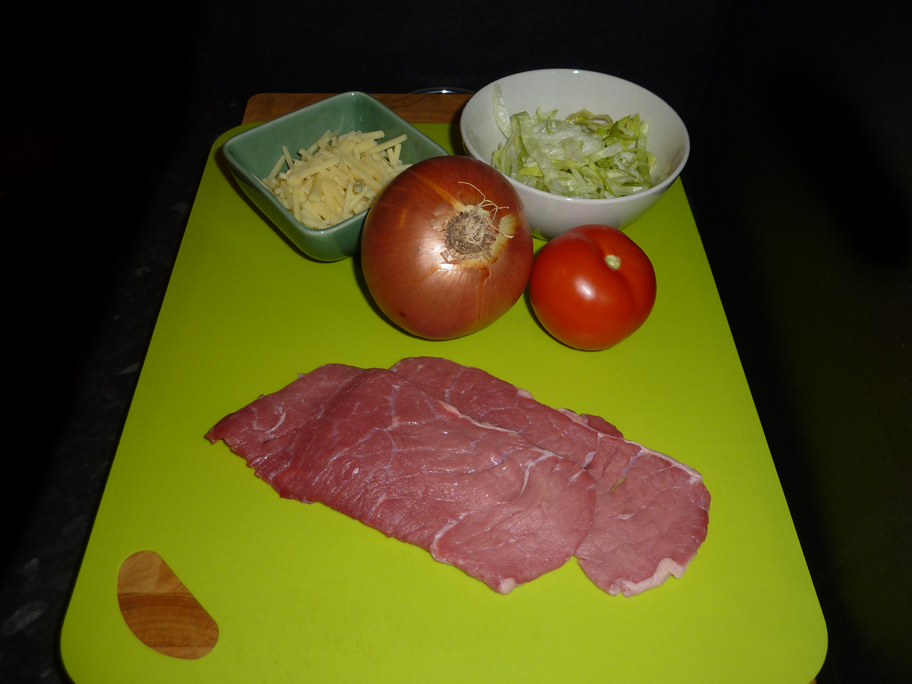 Before I begin, there is a little story to the birth of this dish. If you wish to read, continue on. Otherwise, feel free to skip down to the actual recipe below.

Very recently, I have taken a whole new career direction into my hands. With this came a few realizations regarding health as well as ensuring I take the time to eat properly. This was helped along, as you may imagine, by my love of cooking in general and this is not a hobby I was prepared to quit for the sake of playing video games. Gaming regularly had never been something that stopped me cooking my own meals before, but streaming them to an online audience changes things somewhat. It would be like a news anchor continually stepping away from the broadcast to make themselves a sandwich. Of course this never happens as they rotate with others at different times of day. I don’t have that specific work dynamic so I opted for a schedule that would leave me a chunk of free time to prepare my own food, eat it, let it digest, and clean up after myself before I go back online for a few hours more.

Initially, it has worked out well, though over the new year evening I had to rethink my options when I scheduled a twelve-hour broadcast that would run over the 2017-2018 transition. I asked myself what I was going to do for food. I could just be lazy and put a store-bought instant meal in the microwave, or maybe cook a frozen pizza, but this is not particularly healthy as it is. OK for this one occasion that might not be an issue, but this is how bad habits start. Before long I would be streaming longer hours and ordering fast food deliveries to eat mid-stream so I don’t have to stop to cook for myself. Watching other more popular streamers, I noticed some of them do this, which is fine if they wish. Some of them are young and healthy while I am older and not very fit to begin with. Playing games for ten hours a day non-stop and eating pizza is a recipe for a heart attack and I would like to at least make it into my sixties before I have such concerns.

I thought about food options that I could eat on stream as I play, meaning it had to be something I could eat with one hand that was not messy. Something I could put on a side table by my computer, reach over, grab a portion and take a bite quickly as I continue to play for my audience. Pizza? No, but of course that sounds like it fits the bill, right? Something similar though. My mind drifted to tacos, but again they can be messy if the filling falls out and goes all over the place. So, wraps? I held onto tortilla wraps as an idea and soon planned to make slow-cooked shredded beef quesadillas. I could make them ahead of time, store them wrapped in cling film in the fridge, and reheat them while I take a 10-minute break to stretch my legs. Then I could eat them as I continue to play.

That evening though the filling would sometimes slip out, and on more than one occasion I would end up with grease running down my arm so I had to stop the show for a moment to clean up. Still, I felt there was room for refinement and, some weeks later, I did another twelve-hour stream for the second game in this series.

This time I adapted a snack I usually make myself when I have leftover pulled pork or cooked chicken. I fold the fillings into a wheat wrap with a little shredded cheese and sauce then toast it as a pocket in my sandwich toaster press. I decided to do something a little different with this idea and set out to reimagine the classic cheeseburger.

2 lean quick-fry sandwich steaks such as sirloin
A large fresh tomato, cut into thin slices
1/2 a cup of shredded iceberg lettuce
1/2 a cup of shredded cheddar cheese
1/4 of a large white onion
2 large wheat wraps
Your desired sauce or relish. I used spicy mayonnaise and also yellow hotdog mustard but whatever you prefer will work.

This is a dish that can be prepared in advance and heated up later in the day if you wish, and makes a good work lunchbox filler if you have means of heating it there.

I find it easier to have everything to hand once I am ready to assemble the wraps, so I will go over all of the preparation steps first. It should not take longer than 10 minutes before you can begin assembling them.

Trim any excess fat from the steaks and fry them for no more than two minutes either side on a medium to high heat with a little seasoning of your choice. Once done, set them to one side to cool. They should cool very quickly being so thin.

Thinly slice the onion and heat a teaspoon of sunflower oil in a saute pan over a low to medium heat. You could even use the same pan you cooked the steak in if it is a flat-bottomed pan. I used a griddle pan for my steak so that would not work for me. Saute the onions over low heat and add some ground black pepper once they begin to turn translucent. Turn them over occasionally until they are soft and beginning to brown, but not charred, and remove from the heat to cool.

Note: My original recipe also added finely diced red and green bell peppers though I felt the taste was not quite right and omitted them this time. Previously, I also stirred in some of the yellow mustard as they cooled which worked quite well as long as they are cool enough to not burn the sugars in the mustard.

Also, as the onions slowly cook you can take this time to shred the lettuce and cheese and portion them out into small bowls for ease of access later. Also slice the tomato. It is best to avoid thick slices so the filling does not become too thick. You want around two to three slices per wrap but no more, unless you have really huge wraps to begin with. See the images accompanying the assembly instructions as a reference to the quantity of filling. If you over-stuff them they might rip as you fold them over so be mindful when measuring out these fillings. You may need to adjust my quantities up or down.

Now you can slice the steak. See the images below for reference. First, cut each steak in half across the width. (fig.1) Then slice along the length of each piece cutting down across the grain of the meat. Keep the slices very thin like matchsticks. (fig.2) 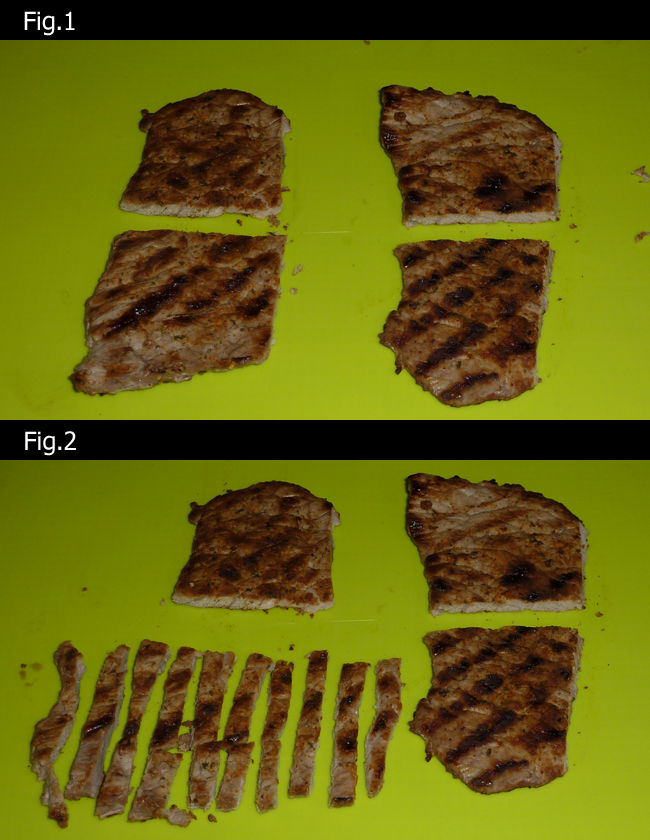 You can, if you wish, skip slicing the meat. I prefer to do this to avoid biting into the meat and pulling the whole filling out of the wrap pocket on your first bite. I find this way it makes for easier eating and avoids spillages.

At this point, if you are pre-preparing the ingredients to make wraps at a later time you can store them in clip-lock tubs in your fridge. I would suggest you not slice the tomato or shred the lettuce at this time and do those when you actually assemble the wraps. Or you could, as stated above, assembled them ahead of time and wrap them individually in clingfilm. They can keep in the fridge for around half a day but any longer and the juices from the tomato and onion will begin to soak into the wrap and they will start to turn soggy. Still, you can take them to work for lunch and heat them in a microwave, for example. Or even eat them cold if you wish.

Now we assemble the wraps. As I have said above, it is important to not over-fill each wrap. As a guide, I suggest you imagine a line from the middle of the wrap to the edge as though you were measuring the radius. The inner half of this radius should contain the filling, any further than that and you will struggle to fold the wraps over. And stacking ingredients up too high will also bring the same issue, so try and keep the filling no higher than half an inch when pressed down.

First, spread a small amount grated cheese around the middle area and top it with lettuce. This is the base of your filling and a good guide to how far out you should stack the rest. Be sure to tuck the filling base around into a neat circle. Place the slices of tomato over the lettuce. As you can see below, I have also added a swirl of spicy mayonnaise.

Next, heap the sliced steak on top and press down firmly, but not so much that you push the salad base out to the sides. Again, keep the stack neat as this will help when folding the wraps over. Add a couple of teaspoons of the cooked onions and, again, press them down evenly over the steak. I have also added a swirl of mustard to the onions. I find their flavours work well together, especially when paired with beef. Finally, you can top this off with a little more cheese.

Now we fold the wrap into a pocket. I have taken pictures of each stage of the fold. In the end, you are looking to create a pentagonal shape.

First, fold one edge over into the middle and hold it in place. When you fold this side in, be careful you do not push the filling away from the middle. Next, take hold of the corner where the wrap has folded at the edge and bring it into the middle as well, as shown below.

Do the same again further round, making sure to not disturb the filling too much as you fold it over.

As you make the fourth fold, you should have the remaining end of the wrap form a shape that gradually narrows from the middle to the edge. Tuck the edge in until you get this shape. Finally, pull the remaining edge over into the middle carefully. Again, don’t be tempted to fold it too tightly as you could rip the wrap on the corners. If the filling has begun to tumble out onto that part of the wrap before you fold you can stand the wrap upright and shake the filling back down. You could also push it back into place with a spoon or fork before making the final fold.

Cooking these is simple, however, it is important that you place the wraps fold-side-down on the sandwich toaster. I recommend you place them on a low heat to avoid burning the wrap before the filling heats up fully. You do not need to use a sandwich toaster press either, as they can be baked on medium heat in the middle of an oven. If you are adventurous you could even try to fry them in a skillet with a little oil or butter. Either way, remember to place them fold-side-down first to help the wrap seal into a pocket. You can also make other variations of this wrap such as chopped chicken breast, pulled pork or shredded beef, or even vegetable burgers. You could make them with smaller burger patties inside, pre-cooked and thoroughly drained to be sure the filling is not greasy. Go nuts and enjoy. 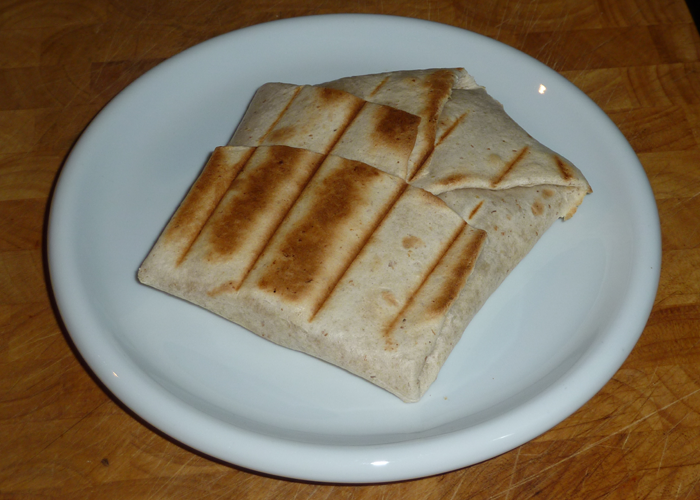 One Response to Steak Burger Wraps