Over the last few months I have been working on getting a YouTube channel up and running. It has been a journey, to say the least. And now the day has finally come where I can share the new channel with all of you! Click the link below to visit the channel. I will be uploading backlog content there regularly. Remember to subscribe so you won’t miss any of it!

There are more details about the YouTube channel launch, and what this means for Iron Wolf Gaming, in the announcement video below.

One year ago I wrote a blog where I opened up about being burnt out. I had the chance recently to discuss this with someone in the community and the idea of a recap blog sprang up. It seemed like a great idea so, here it is.

Since I wrote that blog, I have not felt anything close to the level of burnout that I experienced last year. So, I guess I can claim success! Yay! Oh, but hold up a second there Mr Wolf, before you go planning the wild celebration party. It might be a good idea to go over some of the specifics of the last blog and break it all down piece by piece to see what real measure of progress there has been in the last twelve months. 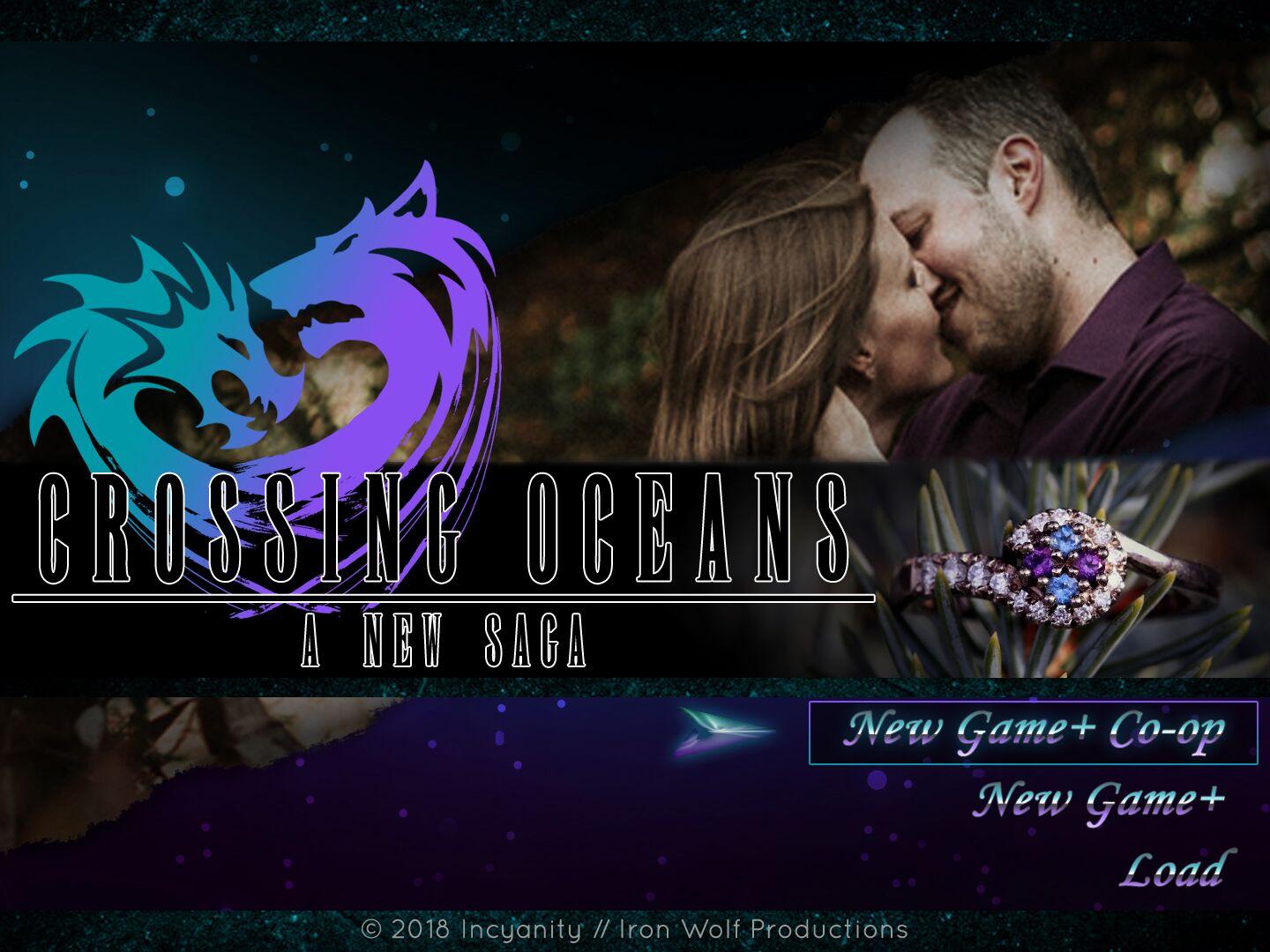 About ten years ago, thanks to EVE Online, Cheyenne and I met and became friends. Our first face-to-face meeting took place a short while later in Iceland at EVE Online’s Fanfest celebration. Since then, we’ve grown to be the best of friends—and in the last several years, even closer than that. So today, it’s with great excitement that we announce our engagement!

In the past we played the “game of life” individually. Now we’re looking forward to starting a co-operative game together!

Our wedding will be a private (parents only) ceremony in the Cumberland Forest on Vancouver Island at the end of May 2019. We hope to host a small gathering of friends and family in Alberta to celebrate our marriage shortly thereafter.

Recently, and not for the first time in the last year of streaming, I began to feel a period of burnout coming on. It was a slow creep at first, and last weekend it hit me suddenly like a wave. When this happens, the natural instinct kicks in and you either fight it or try to get out of its way, but it is too late. The water surges in and you feel yourself getting pulled around in all directions. To further milk this poetic tidal analogy, there is only so much water you can fight through before you fall in and get rolled around. And the only thing left to do is to scramble back to the beach with a mouth full of sea water and some seaweed clinging to your head

So, I started streaming video games.

It’s been way too quiet here lately and I should blog a lot more so here is a little update on what I have been up to outside of the writing front. I have another half-finished blog about writing from a month ago I owe some time to, and will get round to finishing it. Meanwhile, I have been a little preoccupied with a new activity: streaming video games on Twitch.

Streaming games has been something on my mind for the last two years. I have been watching lets-plays on YouTube for around a decade, ever since I got bit by the Minecraft bug and played it non-stop when I was not at work. In the last three years, I have added watching live streams to my list of chosen entertainment and have found a batch of streamers who play games that I enjoy watching on a regular basis.

In November I published the first part of The Skid Journal’s first chapter. Needless to say, given the length of time it took to complete, I had a little trouble with this part. It is difficult to put my finger on why, though one thing I was conscious of was a need to work on something new and interesting while the idea was fresh in my brain.

In my last blog I spoke about a new project called Ferum Republic. I started making notes for this story earlier in 2016 and found it turned into a larger than expected world building project which has given me more story to work with as a result. Besides being a different kind of story to The Skid, I am also exploring a different style of writing. More off the cuff, with less actual planning ahead. This is new to me as I have always plotted out the script ahead of time and tried to write to that. I found with the last part of The Skid Journal that this sometimes creates problems. Maybe because my creative impulse is spent on the planning phase, leaving little else to offer when I was fleshing out my skeleton of a story.

It has been a while since I blogged anything so here is a quick update on the ongoing projects I have as well as a little tweak to the site here and there.

Let’s start with that last one first. Up until recently, I have only been working on one thing at a time, first with The Skid Journals parts 1-1 and 1-2, then re-editing 1-1 and republishing as per my previous blog entry. However, I recently began writing a second short story along with part 1-3 of The Skid Journals. More on this below. So, with this dual project on the go, I felt it was time to start tracking them on the site. And going forward for any future works I have on my table. I have added a progress bar plugin to the sidebar to track ongoing projects and started with the first two and their current states. I was not really able to find any that fully matched what I am looking for, given that my writing is not set to any specific goal in terms of length or content other than getting it done. I was not sure how exactly I would gauge the level of completion of any of my stories and represent them in one single bar. Overall I view my writing to be a three stage process. First is the outline, where I scribble down a note form of the flow of the story. Second, I begin working on the draft for the story, essentially padding out the outline, and usually changing stuff along the way on a small scale as the narrative takes shape more naturally. Finally, I proofread the story giving it two passes of editing. The first focusing mostly on grammar and punctuation and the second pass being a readability check making adjustments to wording and such. With the single progress bar, it is difficult to track this other than estimating the volume of workload represented by each section. It’s not as difficult as it sounds, though, and I feel I know my own writing well enough to quantify my own progress.

And the words will… re-flow?

Something I am very much aware of as a budding writer is, you must always be ready to learn new things. Another thing I believe is that you can never have too much critique, and should never take it badly when it comes your way. Recently I published the first and second parts of The Skid Journals story series, feeling rather proud of my efforts. This is not saying much, however, given that when writing in the past I would feel ‘good’ about what I was doing. And if checking over my old EVE Online character story backlog has taught me anything, it is that my writing had a long way to go back then. Either way, that does not mean I took a look at my new works here and realized I had written a mess. Far from it, in fact. Though who knows how I might feel in 10 years time, looking back at this site. Only time can tell.

Back to the present, however, a good friend of mine offered to provide me with some feedback on the first journal. I had mentioned in my previous blog that I have a friend who used to edit professionally. By way of a quick plug, her name is Cheyenne and you can find her own writings and assorted art on her site, aka Iron Dragon. Cheyenne is also the friend who prompted me to begin this site, as well as setting me up with discounted hosting, and provided me with support setting up the site. She approached me soon after the second part was published in the beginning of March and offered to spend some time going over the first part to give me some pointers. I had expressed to her a couple of times in the writing that I had struggled with some of the technical details, again as mentioned in my previous blog about my experiences writing the first two parts.

And the words will flow.

I figured a little blog would do right about now, and I can share some experiences with the site so far. Not to mention getting some content out at last. Since I want to blog about the whole writing thing, to begin with I will start with the shameless plugging.

Around a month back I made a decision to begin releasing the story I had been working on in smaller sections, instead of one huge block of text. On the subject, here is a link to the first part. After making this decision I split what I had currently into separate parts and began the editing and re-write process. This is the first of a new series of stories based on a roleplay session for a game called Apocalypse World, as I detailed in this previous blog.

It has been a while since my last, and first post here. A little update is in order on what is currently in the works. So, straight into it!

The theme I have used here since launch has been more of a place holder and the more I looked at it the less happy I was. I did not imagine I would keep it long anyway, so I have spent a little time checking out other themes after it became clear I could not tweak this one very much. I could also not settle on an overall theme for the site, though as a good friend of mine said, it is a difficult thing work out. I think I may have settled on a theme now, and need to research what the paid version will let me do before I commit fully. The biggest issue I have had with the current theme has been text layout. As a best practice, the font for a website should always be clean and of a good size with good spacing to avoid eye strain. However I felt like the old initial theme had the text set too big, with a narrow area assigned for the main content making each s paragraph seem to flood the available space. When writing short blogs such as this, that may be fine. However, publishing longer stories was different and the previews of some current works always looked wrong to me.