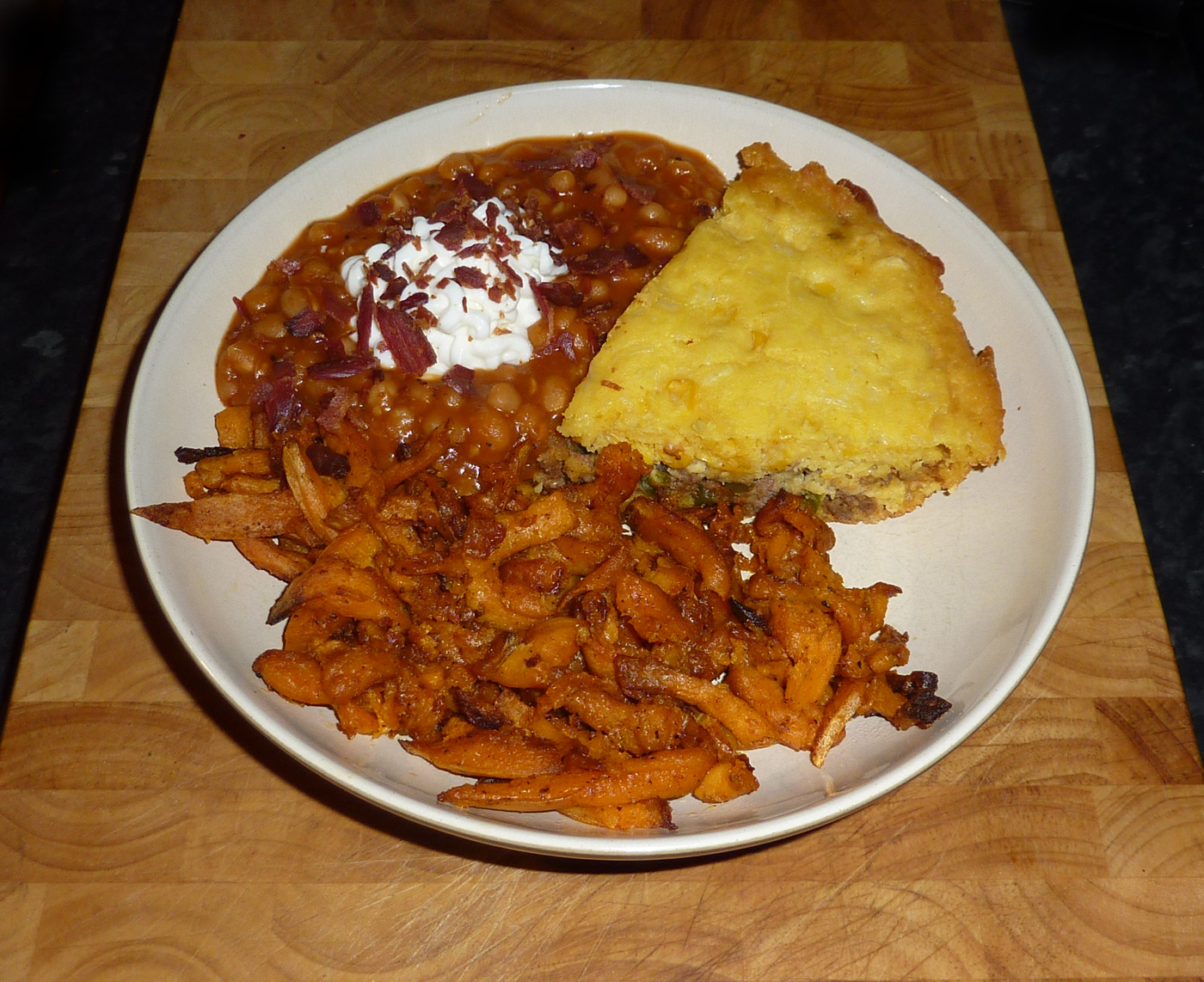 Some years ago I was given a copy of a cookbook by my one of my favourite chef pairings, The Hairy Bikers. The cookbook is called Mums Know Best, and I highly recommended it. This is my version of one of the recipes in that book, which they called Texas Cornbread. However, having done a little wider reading of more recipes I soon realized that what everywhere else calls Texas Cornbread is not the same as the book’s version. The book’s version of Texas Cornbread has minced beef sandwiched between two layers of cornbread batter and baked, while the recipes online seem to be simply cornbread with chillis chopped into it, and sometimes cheese. So, for want of not stepping on any cultural toes, I will call mine Stuffed Texas Cornbread.

As I have said, this is a modified version from the book, so if you were to compare them you will realize some of it is a little different. Read on some more after the recipe below for some insights I had between my first two attempts.

I gave this recipe a test run a couple of weeks ago and learned a few things. Having followed the recipe in the book step by step I felt that the beef lacked any taste, given they simply fry it with onions and nothing else, and the ingredients for the cornbread batter would have made a mixture that was entirely too runny to serve the purpose. Maybe this was just me, and what I had to hand. Specifically the recipe’s call for a can of creamed corn. Now, this is not something one typically finds on the supermarket shelves in England. And attempts to make my own for these recipes has resulted in a mixture that was quite runny. Adding this into the batter meant it would be way too wet, and as such I left it out of my second attempt and opted to mix loose sweetcorn into the batter instead.

I also decided to add more flavour to the beef by way of a packet of taco seasoning mix and a little tomato paste. Though any kind of seasoning would do. As long as it is a dry mix and not a sauce. I have also omitted the jalapeno peppers in the recipe, as I am not really a fan of them to begin with, and finally added bell peppers to the beef for some added crunch.

Also, something I learned while assembling the dish the first time around is the importance of speed when pouring the batter into some hot fat in the pie dish. I was too slow before, dawdling a little as I discovered I had skipped a step and the fat got cool while I sorted out my mistake. The reason for pouring the mix into the hot fat, like butter or bacon fat, is to cook the base quickly and seal the bottom ready for the beef. So when I dropped the beef into the dish on top of the batter the weight of it pushed the wet mixture to one side and the beef cooked to the bottom of the dish, sticking in place and making serving it difficult. And, related to this, I simply dropped the first heaped spoon of beef into the mix instead of gently placing it over the batter evenly, so this did not help. This time I cooked the beef before anything else, even before making the batter or heating the pie dish, giving it time to cool so I could use my hands to sprinkle it around. And the last thing I did was put the dish in the oven to heat the butter, getting the batter into the dish the minute I took it out when the butter was bubbling.

Overall it was quite successful, and I was pleased with the result. I think I need to tweak the batter mix a little more and I am still not sure about using sweetcorn in the batter mix. I might do things a little different next time and add the corn to the beef mix too, or just omit it entirely. Either way, I hope you like the look of this and decide to make it yourself.

One Response to Stuffed Texas Cornbread