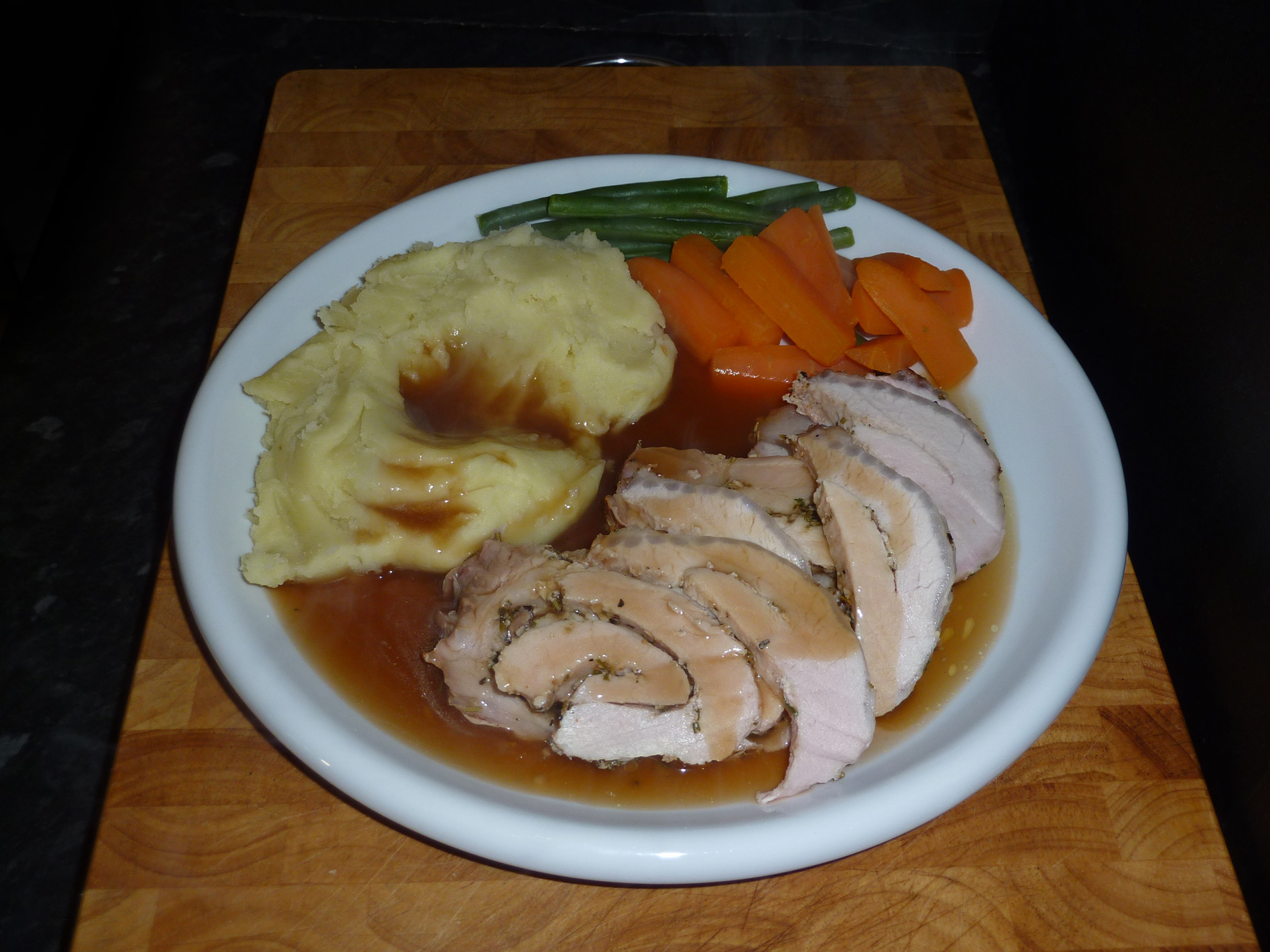 Over Christmas and the New Year I visited a good friend in Canada. I came away with a cookbook as a Christmas gift. Once I got home I began marking down some recipes I wish to try out. I have tried two of them already this year, and the porchetta marks the third on my list. A porchetta is an Italian style rolled pork roast with crackling and is popular in various regions of North America. It is made with a liberal amount of herbs such as rosemary and sage, as well as having garlic included in the rub. There may be regional variations too, though I decided to stick with a classic basic to get the technique down.

Normally I do not make roast meats as I am usually cooking for one. And large chunks of meat will often go to waste before I use them fully. Also, pork is not something I eat much of overall outside of making a stirfry, and there I have had little success making the most of it without drying the meat. Either way, I cannot resist the idea of making my own pork with crackling. So I picked out a small roasting loin, bought some herbs and garlic, and also grabbed some bread rolls for leftover sandwiches.

You will also need some butcher’s string to tie the joint up after rolling, and a roasting tray with a rack that fits inside for cooking.

Afterthought: I may try this again with 2 tsp of dried yellow mustard powder and lemon juice added to the rub mixture.

As I said in the introduction above, I don’t roast meats often and I do not cook much with pork. Where I have, I have overcooked it and dried out the meat. As such I was paranoid I would do the same with this roast, and felt I was leaving it in too long. I also worried that I would take it out too early and it would be undercooked in the middle. I was working off adjusted cooking times, as well as quantities of marinade, as many recipes would call for a larger portion of pork than I had bought. Certainly, the portion I used would struggle to feed more than three people or two very hungry people. Combine that with my lack of experience in roasting meat and there is potential for disappointment and raw food.

As it turns out, the roast came out well and the meat was still juicy and succulent. Of course, this is helped by wrapping the loin roll in the skin and fat, which will baste the meat as the fat seeps through. Also, the olive oil in the marinade likely helped keep it moist through the cooking process. I had the joint in the oven for a little over an hour, though fan assisted ovens would likely do the job a little quicker. As such I suggest people keep an eye on their roast after 40 minutes. Also, don’t forget to rotate the roast half way through if, like my own, your oven is not fan assisted. This will help with more even cooking essential to the crackling.

Once the roast was done I placed it on a cutting board and topped it with foil to rest for 15 mins before doing anything else. This was a good time to begin working on the sides such as the veg and mashed potato. I also removed the string and took the fat layer off, as I could see it had not crisped like I thought it would underneath, where it had contact with the meat. The fat was still very rubbery and, personally, I do not find that appetizing. I sliced the crackling into strips and then further chopped those strips in half before putting them back in the oven on the rack. I baked them at 170c for around 30 mins, continually checking them to be sure they did not burn. I turned them over half way and in the end, I was rewarded with a nice bowl of scratchings. OK, it’s not healthy as such but it’s fine if you don’t have them every day. And at least this way you can control how much salt is added to them, unlike pre-packaged scratching from the store.

I was quite pleased overall with how this turned out and I can see myself making this in the future. Having the dried herbs in jars, and pre-minced garlic on standby makes for less waste overall and they are there to be used when needed. So I could easily buy another roast on the spur of the moment when food shopping and not worry too much about having everything to hand when I get home. And, as with all things, practice makes perfect. As I said in the ingredients list above, next time I may try variations of this and rub some mustard powder into the mix as well. And this can always be adapted to serve other forms of cooking such as Chinese BBQ pork or Jamaican jerk.

Until then, I have leftovers to make into tasty sandwiches.