As people who know me will not be shocked to hear, I love cyberpunk settings. I am also a big fan of games that tell a compelling story about global conspiracies or mysterious, corporate/state intrigue. State of Mind, it just so happens, is set in a cyberpunk setting about a global corporate conspiracy tangled in the mystery of how a man’s family suddenly vanishes without a trace during a large gap in his own memory. Sounds like my cup of tea!

Released by Daedalic Entertainment in 2018, State of Mind is what many would call a story-telling game, much like the Life is Strange franchise or anything released by Telltale Games in the last decade or so. Much of the gameplay consists of moving through the environments and interacting with objects and people to get a sense of the world while trying to achieve the story objective through conversation trees and investigation. There is also a small number of puzzles to sink your teeth into and other interactive environmental mechanics such as controlling camera drones.

While these mechanics help to break up the overall ‘walking simulator’ feel of the game, they are not the focus. The puzzles are, at best, simplistic and can be beaten with a little consequence-free trial and error. The core of the game is working your way through the story, playing as two main characters (though you do get to control some others as one-off instances) and untangling their respective mysteries which slowly become linked.

Meet Adam, one of the character you can play. Adam is having a great day!

The art style of the game was quite interesting and reminded me of the Orwell series’ character style where everyone is a walking collection of polygons. More importantly, the voice acting in the game was quite decent and boasts some star power with talent such as Doug Cockle and William Roberts who voiced Geralt and Vesemir respectively in The Witcher.

While I will say in advance that I did enjoy the game as I was playing it, there were quite a few issues that caused mild frustration here and there. For instance, the movement controls were quite clunky as characters would not simply turn in place and needed to walk around in circles to change direction. This is not such a deal breaker, given the lack of any real action in the game. You won’t find yourself dodging gunfire and explosions. It does make moving around in some of the tighter environments a little difficult, though.

Then there are the mechanics I mentioned above. Several hours into the game you seek out an anarchist collective of hackers who introduce you to a new ability. You are given what is essentially a tutorial on hacking the surveillance drones around the city and using their facial scanning system to locate a target. It felt at the time like this would be somehow part of the game going forward, however it never comes up again in the whole game. Oh, sure you get to use the hacking device at other times. One time you need to access security cameras and change where they are pointed so you won’t be seen. In another area you can control large cargo drones and use them to move boxes around to use as cover. Still, bringing up a new mechanic in tutorial form and quickly dropping it makes it feel like the game was originally meant to be much larger than it was and had to be cut down during development.

Initially you do a little story with one character before the game swaps you to another and then back again. Eventually you can swap manually as both characters encounter each other and join forces, each one having their own side of their mutual investigation to cover. Not to mention the story that links them both quickly became interesting as it began to unfold. 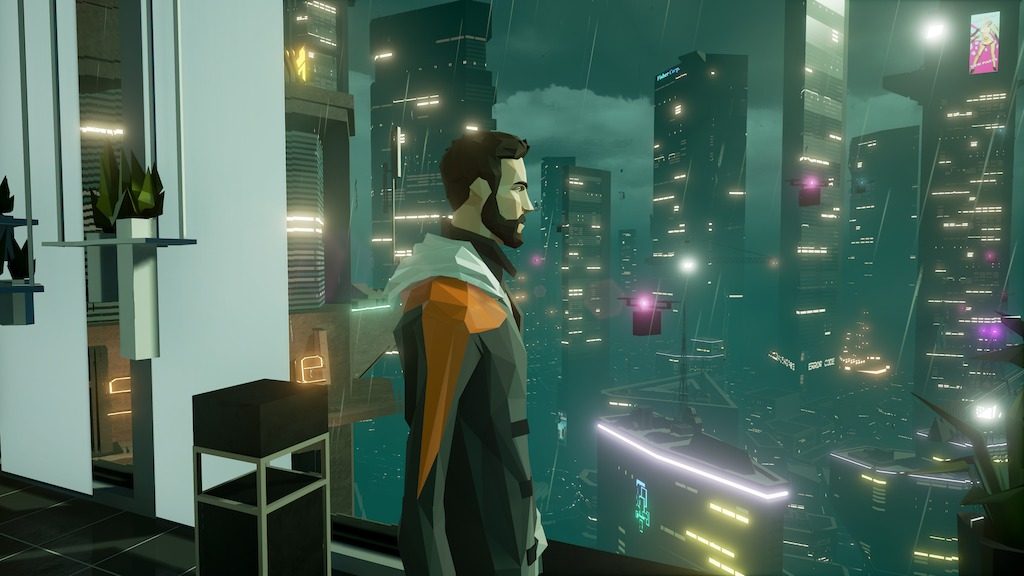 Meet Richard. Richard is looking out at the city, trying to find a more satisfying story ending.

And with that I must cover one of my biggest issues with the game. The long-term story delivery. At first the mystery was quite engaging so there are no complaints there. New questions would pop up as the plot widened and I was having a lot of fun thinking things through and guessing where it was going. It keeps this up just long enough to not be frustrating before it begins delivering some answers wrapped in yet more questions. While compelling for most the game’s duration, it begins to fall apart towards the end as hole start to appear.

Many of the new mysteries introduced around half-way through the game are never fully paid off. The motivations of some of the key characters remain obscure and go unexplained. And the identity of another masquerading under a false identity is never revealed at all, even if the player can make a pretty reasonable guess if they do the due diligence when investigating.

The game does have multiple endings that can be influenced by choices you make in dialogue through the game. You even decide at the end who to save, which has a more direct impact on the game’s ending scene. So other endings may have more payoff and wrap up the story more neatly than the one I got.

Length wise, the game took around 15 hours to complete. I consider myself reasonably thorough in games such as this, as I take my time to look at everything and read everything. If you prefer to skip most of the fluff, then the game would be shorter by around a couple of hours. So, a reasonable length in my opinion. If you like story-heavy games this is worth checking out, but don’t expect to be wowed by the ending.