Home is where the Homefront is.

I viewed Homefront from THQ at a slight distance as a curious observer for some time in the build up and post release, not entirely sure what was putting me off about it. I saw podcasts on G4TV about it, online trailers on Steam when it was released and read a couple of articles about it and all I was presented with was another first person shooter and another fantastical story about America being invaded. Maybe I was getting bored with this story after playing Modern Warfare 2 and World in Conflict, so maybe this put me off somewhat but I figured I should give it a fair shake when I saw it on the specials shelf in the store.

I loaded it up, now finding I was looking forward to getting my teeth into it, despite my apprehensions about the storyline.

It is a lazy story-in-a-bottle and the only real believable parts are the possibility of civil collapse in the west after a tough economic time and energy crisis, and the timeline set by the game backstory being somewhat longer than I originally anticipated. So at least this did not suffer from the MW2 syndrome of ‘want war now’ with Russia invading the USA months after a sudden disagreement. (OK it was a mass killing in an airport but still, iffy at best.) 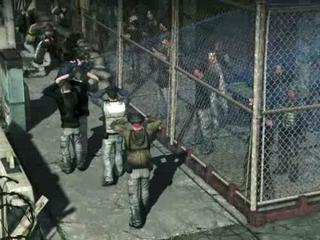 Moving past the story, I began the campaign with mixed feeling and quickly found myself playing Half Life 2. Well, almost. Occupied American city, San Francisco, under heavy Korean boot with checkpoints all over town, automated turret systems on cherry-picker like arms with scanners checking faces, masked troops rounding people up and herding them through fences to work camps, registration buildings, hold ups and road blocks and even a rather harrowing public execution that still chills me to hear the child’s screaming cry seeing his parents killed by firing squad on a street corner. Already I felt rather emotionally invested in the plot and wanted nothing more than to choke the Korean troop on the prison bus I was travelling in with my handcuffs. Of course a cynical reviewer would call this pandering to the moral self image of the westerner by presenting them with a grossly brutal oppressive force beyond all reason. But let us not forget these horrors happen all the time in the real world, just not in our happy corner of life, and being subjected to this will either crush your soul or ignite your indignation to the point of picking up a weapon and smashing to faces in.

Anyway, take it how you will, it is still knows how to play on your emotions with good effects.

Graphically, the game is very pleasing with some pretty good options for things like motion blur and camera shake. Dropping from a modestly high ledge will cause your view to flash a little bright for a second and blur your view, standing near the heavy flack guns as they thump out anti-air suppression will throw your aim off with the ground tremors and the lighting effects when turned up full are very good as well. Expect a high spec requirement to have it all, though.

The game itself is activated completely via Steam even with the disk version, and in fact the disk played no part in installation anyway or even activation. You have a product key to activate via steam, and it all self-downloads into your steam listing. So really the disk is there simply to put the game into your steam list and then rely on download speeds to get the game. If you have a slow download I pity you, since the game is a huge chunk of gigabytes. So this is a tick in the bad column since people with basic internet connections or very old copper wire ADSL will suffer when the disk install followed by steam updates after would be much quicker. 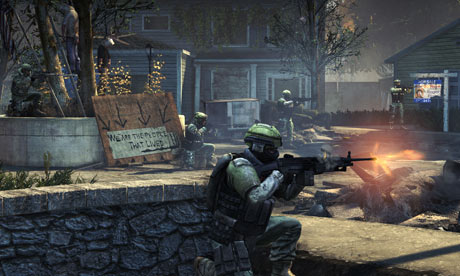 Anyway, onto the game itself, and story aside I was propelled quickly from the Half Life 2 feel of Combine soldiers on every street corner to… well, Modern Warfare 2’s invasion and occupation of suburban USA. I know I also mentioned MW2 before a couple of times and, to be honest, you better get used to it because very quickly Homefront looks like a re-purposed MW2 right down to the sequence of events. Though I guess a more generous viewpoint would be to call it a theme park FPS that simply goes through the same motions as all other theme park games. And another honest correction from what I said above, you are not thrown out of HL2 right away, since your sudden rescue and killing of the guards is handled by a hot babe with a gun and a low cut top under her jacket in the most blatant rip-off of Alyx Vance and her introduction I have ever seen. The only difference is she is accompanied by a moody and over-aggressive man with an attitude problem who throws a gun in your direction and tells you to point the business end at anything you want dead.

Some scenes you are running through abandoned buildings with support characters fighting off your enemy. The tools needed to do the job are there to hand when you need them, like being introduced to C4 and flanking an APC to kill it. A situation and mechanic I never needed to do again anyway. You are placed in the turret of a Humvee assault jeep while the NPC drives ‘on-the-rails’ and you shoot, something you only do once again when the game needs you to. You direct a radio controlled battering ram of a tank when the games wants you to, and stop when the game tells you to and control is removed. You ride in the door of a helicopter picking off enemy troops on a bridge before landing for an assault, (sound familiar, MW2 players?) But only when the scrip needs you to. And you have access to a UCAV and bomb the enemy when you are allowed. If you need a shoulder launched SAM to kill an attack helicopter you can find it right there in the immediate area, but have no further use of it when all is said and done and never come across it again. You air drop your fellow resistance fighters onto a convoy of trucks to hijack when the story needs it, and never again. And so on. All the scenes are canned and prepared with little other way of doing it.

I am not complaining, but the similarity to MW2 scenes is uncanny and it seems that the developers took a current game and the hot flavour news of last year with the Korean sub sinking and Kim Jong Il announcing retirement and made a new story with the same game. Even the gun selection is near enough identical with each weapon like an M-16 having different configurations. One has an iron sight, one has a holographic sight, one has a red dot, one has a grenade launcher etc. When you are injured, the current flavour of wait-and-heal is present as is the run from cover to cover method of fighting. Hell there is even one scene where you kick down a door and suddenly the world goes slow-motion while you line up headshots, just like the MW2 oil rig scenes. I guess I am just a little disappointed that I cannot review this game without drawing comparison to another title and being right.

And as a clone goes, it is a bloody short one. And given that we are comparing this to MW2 then that is a hell of an achievement, and not one to be proud of. I completed the single player campaign in around 3 hours and was left with the unresolved ending in the air, again, much like the ending to MW2.

Anyway, being a clone of MW2 is not all bad since the game itself played solid with no glitches in sight, and this is also something little brother Homefront has inherited from MW2. The game is stable even running at high res, load times are short between scenes, the acting talent is done to great effect, despite characters being drawn from a pool of common stereotypes, and the mechanics that are in play in the special theme scenes are executed well, if lacking a little challenge in parts. The helicopter hijacking scene with the tanker trucks made me groan when they tell you the plan and I figure ‘Ohh here we go, one of those parts where you have to get it just right and half an inch off and you have to start lining up again.’ Though it was easy and simply flying along side and tapping E as soon as I saw the quicktime prompt, and the computer took over for a few seconds as the pre-canned scene took place. And by the time it was done, 10 seconds later, I felt like it was all a little too easy.

So, down to the final verdict. Would I recommend Homefront? Well, yes and no. If you played MW2 and liked it then it will do as a holdover until MW3 comes out later this year. Think of it like an alternate ‘what if’ scenario or an unrelated footnote to MW2 since you will already be familiar with how it plays. But do not pay full price for it, whatever you do. It was bad enough doing so for MW2’s truncated story, and this one is about half the size to begin with. But it is stable, playable, engaging and somewhat fun as well. So have at it when it is on offer and I am sure you will like it.